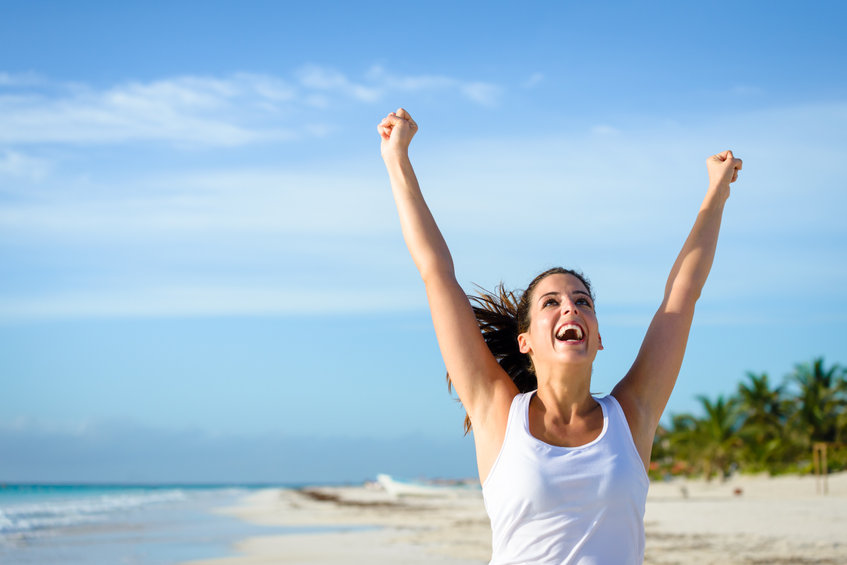 When first approaching this topic, many of the stories that popped up were, of course, targeted at losing weight. But we wanted to look at other inspiring women’s health success stories that are not just weight loss related. These are stories that help women remember how lucky they are to be healthy, alive, and able to do the things they love. The following health stories will hopefully inspire all women to never give up and persevere.

In 2003, this story was everywhere in the news. Bethany Hamilton, at the young age of 13, was out on her surfboard in Kauai, Hawaii when she was attacked by a shark. Through this ordeal, she lost almost two-thirds of her blood and her arm.

But losing an arm wasn’t going to stop this determined young woman. 26 days after the incident, she was back in the water. Surfing was always her passion, and she wasn’t going to let this horrific event determine her fate.

Her unwavering devotion to surfing, her faith, and her strong mindset allowed her to continue surfing on a professional level. According to theguardian.com, she states that her fear of losing surfing outweighed her fear of sharks.

Fast forward to today and she has a lot of accomplishments. In 2005 she won the National Scholastic Surfing Association National Championship, and in 2016 she came in third at Fiji’s Women’s Pro. In 2021 she welcomed the birth of her third son. Want to know more about this amazing woman? Watch the trailer for her documentary Unstoppable and be prepared to be wowed.

Dr. Nicole Apelian is a Jill of many trades: a biologist, anthropologist, author, and safari guide. At age 30, she was diagnosed with Multiple Sclerosis. After a visit to her doctor, an MRI showed she had multiple lesions on her brain.

Ever a student of life, Nicole researched all she could on this disease. Her doctors prescribed her many different medicines, but to no avail - she would only get sicker. Two years later, she was using a cane during the day and a wheelchair at night. She felt compelled to quit her teaching job.

Feeling like a shell of her former self, she decided that the daily injections weren’t doing anything to help her and were only deteriorating her mental health. She decided to take a holistic path that would include Ayurvedic medicine, acupuncture, and herbal medicine.

Ultimately, through her research, she would develop a wellness plan that would eliminate food sensitivities such as gluten and would focus on an anti-inflammatory diet, which is mostly ketogenic. She also takes her own tinctures that greatly help her muscle spasms, fatigue, and inflammation.

Through her holistic approach and healthy lifestyle, she has since had two boys and has proved she can manage her symptoms through her own lifestyle changes. She even appeared on a show called Alone, where she survived 57 days.

She then returned for a second season, but she had to stop out due to an MS attack. She later discovered that her attack was brought on due to a tick vaccine shot she received at home base before the show started. See her battle her MS attack and the strength she demonstrates.

But before you look at the video below, it is significant to note that Nicole is a skilled woman who did amazing on the show. The purpose of showing the video is to give an idea as to how difficult it can be to live with MS. Had she not chosen the path she has, one of a holistic lifestyle, she would still be suffering daily.

Like many Olympians, there are often challenges to overcome to make it to the Olympics. Jessica Sevick is no stranger to this. Her story begins as a young athlete who was injured in 2013 playing soccer and tore her MCL, ACL, and meniscus.

Still struggling to recover, her mother ran into a physiotherapist and member of the Calgary Rowing Club at the grocery store. He suggested she try rowing as a recovery exercise. Her love for this new sport was immediate, and she found herself consumed by it.

Starting in the winter, she would train on the indoor rowing machines. Learning to row on the water would prove difficult for her. As a 12-year-old, she suffered a traumatic brain injury from a luge accident where she lost her helmet and crashed down the track.

At that time, she spent two weeks in a coma. Upon waking, she would discover that half of her right temporal lobe was dead. As a result, she has trouble balancing, a needed element for rowing a boat on the water. But she would persevere.

Juggling school and training, she had to battle through feelings of depression and anxiety that can often result from childhood brain trauma. She debated quitting and falling back into her old career. If her head trauma taught her anything, it was that perseverance pays off.

Then she was hit with some hard news. She wasn’t going to make the Canadian Olympic team. Devastated, she returned to Vancouver and learned how to row a single skull. Impressing the coaches, she was selected to compete at the Pan American Games.

At the games, unknowingly, she had contracted a bad case of the Norovirus. Still, despite this, she won the gold. Her hardship wasn’t over yet though. Through consistent perseverance, she would be allowed to try out for the Canadian double skulls yet again. But during her training, she would fracture two vertebrae.

Despite this setback, she would push even harder, and she would be picked to go to the Tokyo Olympics instead of the original pair previously selected. Her dream of rowing in the Olympics would finally come to pass. If anything, she is proof that hard work, never giving up, and perseverance pays off.

Watch this video below to see her run at the Tokyo 2021 Olympics.

According to the National Sexual Violence Resource Center, one in five women in the United States experience attempted or completed rape in their lifetime. With such a sad and  stunning statistic, a story like this should not be hidden away in the shadows. We should not pretend it doesn’t affect millions of women.

In the same way an individual must learn to cope with the diagnosis of a disease, too many  women must learn to deal with the trauma of a sexual assault. That is what Zahabiya had to do. The following is how she chose to work through this trauma.

In 2007, during her senior year of university, she was isolated from her friends and taken to a house by taxi where she was raped. After this disturbing experience, all she wanted to do was hide. She was faced with feelings of shame and self-blame. She would try to minimize the experience in her mind.

After two weeks, and through the encouragement of friends, she would build up enough courage to report the incident to campus police. Despite her report, she would pull back as she decided that it was causing more damage than help.

She was asked repeatedly to recount her experience - a difficult and emotionally taxing undertaking. She states that the brain’s natural response to high-stress situations is a prefrontal cortex impairment. Simply put, recollections of the traumatic event are often fragmented.

Despite trying different ways to move on over the following years, it was yoga that showed her the path to healing. It allowed her to be intimately connected to her body, something which she hadn’t done in a long time.

Continuing with her yoga practice, she felt like she was finally regaining ownership of her body as well as a renewed sense of confidence. After completing her Master’s, she returned to her former school, the University of California, Irvine, as the Assistant Director of Campus Assault Resources and Education (CARE).

It is here that she focused on trauma outreach and sexual assault policies. Understanding through her own experience, she knew that many survivors found it hard to talk about their experience. They needed to heal, as she had done through her yoga practice.

She decided that she could help them in the same way yoga helped her. She completed a 200-hour yoga training course and in 2012, founded Transcending Sexual Trauma Through Yoga. She has helped thousands of victims since then and has even gone on to train other instructors. Here’s a little more about what she does. Want to know more about yoga and how it can help you? Then be sure to read our yoga vs. pilates post to learn more.

These four women have all conquered different setbacks and traumas in their life. But despite these setbacks, they have all found ways to reconquer their health, both physically and mentally. Each one could have given up, but each one didn’t. Perseverance was the key to helping all these women overcome their traumas and thrive in their lives. Love learning about health success stories? Then be sure to check out our men’s health success stories post.